From Theatre to Therapy and Back Again

From Theatre to Therapy and Back Again

“At any one moment in our lives we are all in the middle of a multiplicity of stories, all of them being spun out at the same time and woven together to form its fabric.” (Fugard, 1997, p. 3)

I was 16 when I first encountered the writing of playwright Athol Fugard. I was perusing the monologue choices available for cold reading at an audition for Into the Woods and picked up one from the play My Children! My Africa! (Fugard, 1990). After performing it at the audition—for a part that ultimately went to my best friend—I sought out the script at the library. I was hungrily reading plays at this time, but hadn’t ventured beyond the canon of established American playwrights. But this singular show, a beautiful and fierce elucidation of South African apartheid told through the relationship between two teenage students (a white girl and a black boy) and the boy’s male teacher, opened up a world to me—of the consequences of government-sanctioned racism and of the potential of theatre to reach across cultures to provoke emotion in service of understanding the plight of human beings.

Fugard, a South African artist who is now 85 years old and has been writing for the better part of six decades, quickly became my “favorite” playwright. I continued to read his scripts, lectured on him in college, and maintained an interest in the politics of his country, particularly as they shifted rapidly in 1994 with the establishment of the Truth and Reconciliation Commission. I turned back many times to his published notebooks (Fugard, 1983), a collection of life observations that served as source material for some of his early plays. I hold a certain reverence for books, so it’s telling that this volume is the only one in my collection that is totally battered, and in which passages are furiously marked and underlined. So many of Fugard’s thoughts echoed my own life experiences despite the separation of half a world’s distance and 30 years’ time.

I eventually got to meet Fugard in 1999 following his production of The Captain’s Tiger at Manhattan Theatre Club, in which he made his last appearance as an actor in his own plays. He was entirely kind in taking the time to listen to my proclamations of how much his work meant to me, and generous in not making me feel foolish about the emotion that poured out as I fell all over myself to try to formulate words.

Most of Fugard’s plays contain no more than three characters. In their interactions, they struggle to connect across lines of color, politics, generation, or gender. Difference is always a key factor, that which causes conflict and also pushes relationships of closeness into areas of deep hurt. Fugard so often successfully captures the beauty that exists within ugliness, as his characters pursue personal missions at the expense of others (and often with the certainty that they are, in fact, doing what is right). As such, these plays are instructive about the ways that trauma can be borne out of the erasure of one person’s humanity by the force of another’s will.

It is not surprising to me that Athol Fugard’s work compelled me as an actor, but now I can clearly see how many of the lessons in his plays also inform my work as a therapist. In his writing, Fugard often functions as “a witness on behalf of the silenced” (Shelley, 2009, p. 84). By working with traumatized clients, I too have aimed to give witness to their silenced stories, but also to venture with them down the road upon which it is inevitable that they journey, sometimes painfully so. In a time of ongoing manualization of treatment that threatens to rigidify the human encounter within clinical work, it is perhaps redemptive that we turn to artists for inspiration.

Fugard never viewed his scripts as complete, nor the movements and words on the page as the performance itself, but instead saw the texts as requiring action to illuminate them. In other words, he located the potency of his art in “the line which needs the actor’s gesture to complete it” (Fugard, 1983, p. 176). And so it is with therapy, where the words traumatized people speak come alive when coupled with action that counteracts the fragility of the victim experience. By engaging with their stories, my hope is that my patients find that, while the particulars of their traumata are bounded by circumstance, the emotions are shared. Their suffering need not be shameful and isolating, but instead might be part of the greater canvas of human experience—something that can connect them to others.

As we engage with the arts in trauma treatment, we have the hope of co-creating a place where the synergy of word and action have the power to transcend circumstance. By working through them, trauma stories can perhaps be filed away, not as the singular narrative that defines a life, but as part of a larger repertoire. As such, we might find a way to hold this multiplicity of stories—both our clients’ and our own.

“Bella Rose Arts Centre’s stage” by Ryan.brownell is licensed under CC BY 3.0 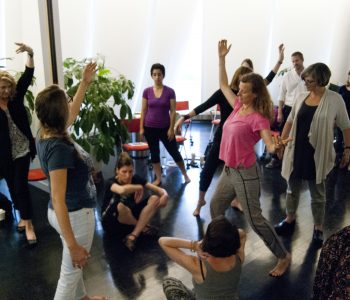 What makes the Kint Institute…